WHO REPORT. Every 20 seconds someone died of Tuberculosis in 2021.

Tuberculosis (TB) truly is the scourge of humanity.

Since the dawn of time, about 106 billion people have lived on earth and about 1% have died of TB.

Over 1 billion people have died of TB. 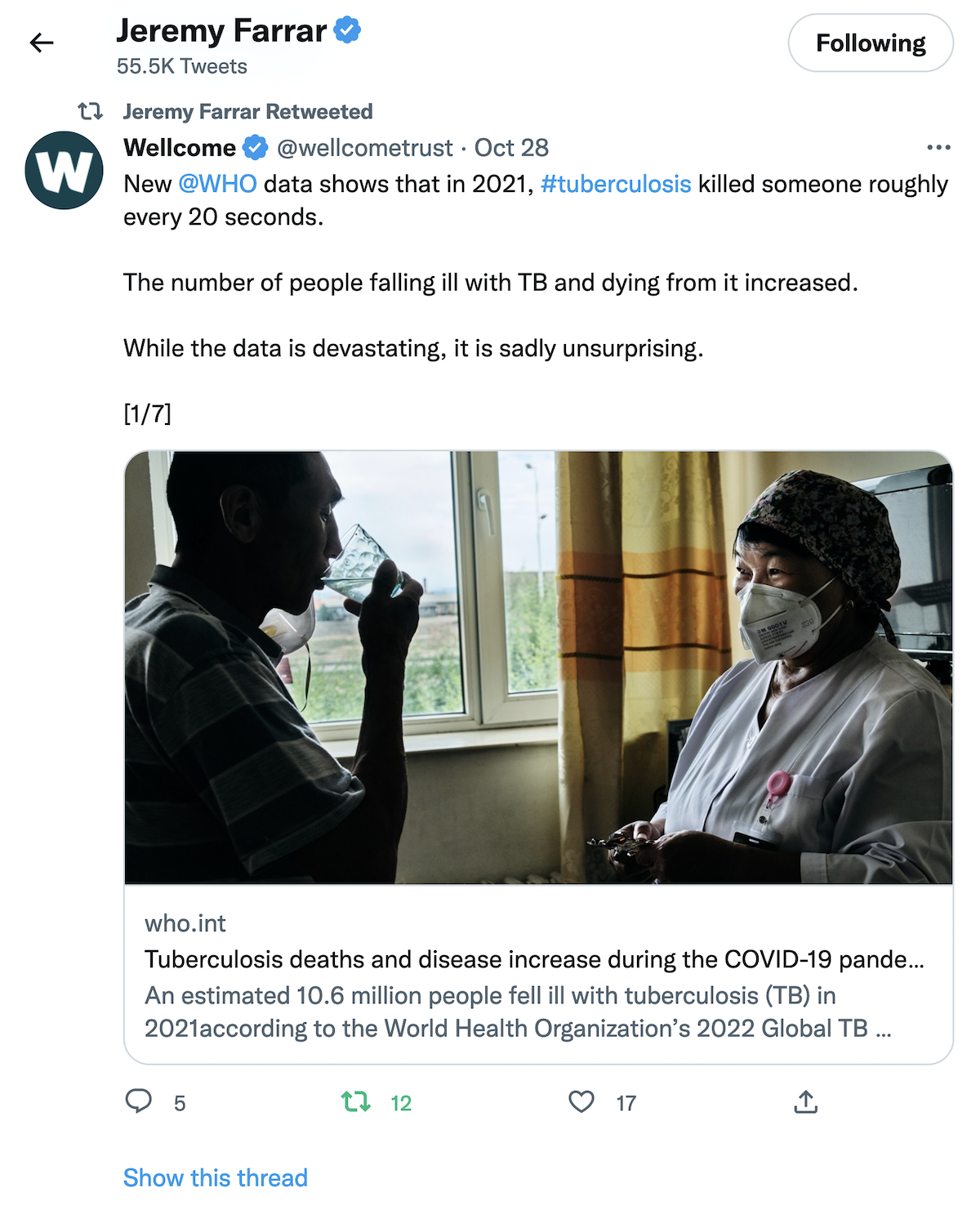 Tuberculosis deaths and disease increase during the COVID-19 pandemic – WHO

An estimated 10.6 million people fell ill with tuberculosis (TB) in 2021, an increase of 4.5% from 2020, and 1.6 million people died from TB (including 187 000 among HIV positive people), according to the World Health Organization’s 2022 Global TB report. The burden of drug-resistant TB (DR-TB) also increased by 3% between 2020 and 2021, with 450 000 new cases of rifampicin-resistant TB (RR-TB) in 2021.This is the first time in many years an increase has been reported in the number of people falling ill with TB and drug resistant TB. TB services are among many others disrupted by the COVID-19 pandemic in 2021, but its impact on the TB response has been particularly severe. Ongoing conflicts across Eastern Europe, Africa and the Middle East have further exacerbated the situation for vulnerable populations.

“If the pandemic has taught us anything, it’s that with solidarity, determination, innovation and the equitable use of tools, we can overcome severe health threats. Let’s apply those lessons to tuberculosis. It is time to put a stop to this long-time killer. Working together, we can end TB,” said Dr Tedros Adhanom Ghebreyesus, WHO Director-General.

Continued challenges with providing and accessing essential TB services have meant that many people with TB were not diagnosed and treated. The reported number of people newly diagnosed with TB fell from 7.1 million in 2019 to 5.8 million in 2020. There was a partial recovery to 6.4 million in 2021, but this was still well below pre-pandemic levels.

The report notes a decline in global spending on essential TB services from US$6 billion in 2019 to US$5.4 billion in 2021, which is less than half of the global target of US$13 billion annually by 2022. As in the previous 10 years, most of the funding used in 2021 (79%) was from domestic sources. In other low- and middle-income countries, international donor funding remains crucial. The main source is the Global Fund to Fight AIDS, Tuberculosis and Malaria (the Global Fund). The United States Government is the largest contributor of funding to the Global Fund and is also the largest bilateral donor; overall, it contributes close to 50% of international donor funding for TB.

“The report provides important new evidence and makes a strong case on the need to join forces and urgently redouble efforts to get the TB response back-on-track to reach TB targets and save lives,” said Dr Tereza Kasaeva, Director of WHO’s Global TB Programme. “This will be an essential tool for countries, partners and civil society as they review progress and prepare for the 2nd UN High Level Meeting on TB mandated for 2023.”

In the midst of stalling progress, there are some successes. 26.3 million people were treated for TB between 2018 and 2021, still far short of the 40 million targets set for 2018–2022 at the UN High-Level Meeting on TB. Of the 30 high TB burden countries, those with the highest levels of treatment coverage in 2021 included Bangladesh, Brazil, China, Uganda and Zambia. The number of people provided with TB preventive treatment rebounded in 2021 to close to 2019 levels, but the cumulative total of 12.5 million between 2018 and 2021 was still far from the target of 30 million by the end of 2022.

More positively, TB preventive treatment for people living with HIV has far surpassed the global target of 6 million in the period 2018-2022, reaching more than 10 million in only 4 years. Seven countries – India, Nigeria, South Africa, Uganda, the United Republic of Tanzania, Zambia and Zimbabwe – collectively accounted for 82% of those started on preventive treatment in 2021.

Seven high TB burden countries in the region – Ethiopia, Kenya, Lesotho, Namibia, South Africa, the United Republic of Tanzania and Zambia- have reached or surpassed the 2020 milestone of a 20% reduction in the TB incidence rate compared with 2015.

Countries are also increasing the uptake of new tools and guidance recommended by WHO, resulting in early access to TB prevention and care and better outcomes. The proportion of people diagnosed with TB who were initially tested with a rapid diagnostic increased from 33% in 2020 to 38% in 2021. 109 countries were using all-oral longer regimens (up from 92 in 2020) for the treatment of MDR/RR-TB, and 92 were using shorter regimens (up from 65 in 2020).

There has been increased access to shorter (1–3 months) rifamycin-based regimens for TB preventive treatment. In 2021, 185 350 people in 52 countries were reported to have been treated with rifapentine-containing regimens, up from 25 657 in 37 countries in 2020.

The report reiterates its call for countries to put in place urgent measures to restore access to essential TB services. It further calls for increased investments, multisectoral action to address the broader determinants that influence TB epidemics and their socioeconomic impact as well as the need for new diagnostics, drugs and vaccines. To intensify vaccine development, building on lessons from the pandemic, WHO will be convening a high-level summit in early 2023.

The 2022 report features data on trends of disease and the response to the epidemic from 215 countries and areas, including all 194 WHO Member States.

Note to the editor

In 2014 and 2015, all Member States of WHO and the UN adopted the UN Sustainable Development Goals (SDGs) and WHO’s End TB Strategy. The SDGs and End TB Strategy both include targets and milestones for large reductions in TB incidence, TB deaths and costs faced by TB patients and their households.

In 2018, countries convened at the United Nations (UN) high-level meeting on TB committed to speed up work towards ambitious targets to treat an additional 40 million people with TB and provide preventive treatment to at least 30 million people at risk of developing the disease by 2022.

TB, the second (after COVID- 19) deadliest infectious killer, is caused by bacteria (Mycobacterium tuberculosis) that most often affect the lungs. It can spread when people who are sick with TB expel bacteria into the air – for example, by coughing.

Most people who develop the disease are adults –in 2021 – men accounted for 56.5% of the TB burden, adult women accounted for 32.5% and children for 11%. Many new cases of TB are attributable to five risk factors: undernutrition, HIV infection, alcohol use disorders, smoking and diabetes.

TB is preventable and curable. About 85% of people who develop TB disease can be successfully treated with a 4/6-month drug regimen; treatment has the added benefit of curtailing onward transmission of infection.

Economic and financial barriers can affect access to health care for TB diagnosis and completion of TB treatment; about half of TB patients and their households face catastrophic total costs due to TB disease. Progress towards universal health coverage (UHC), better levels of social protection and multisectoral action on broader TB determinants are all essential to reduce the burden of TB disease.