01. WHAT is the mission of Normax?

Our mission is to:

We believe our mission is honorable and achievable.

WHY. Our Purpose. Deliver mRNA Vaccines to save lives.

WHAT. Collective Results. Affordable mRNA Vaccines for all.

Our Purpose is to deliver safe, effective and affordable mRNA Vaccines to save lives.

04. HOW does Normax develop and deliver safe and effective mRNA Vaccines?

Safe and effective mRNA Vaccines are delivered through sustained process with zero error and:

05. WHAT does Normax deliver for our stakeholders and customers?

Normax delivers collective results with affordable mRNA Vaccines for all.

06. WHAT is the culture of Normax?

Persistent.  We are innovative and relentless in our battle against pathogens and disease.

Passionate. We build strong and diverse teams with passion for success.

Progressive. We think and act like stakeholders with pride of ownership.

Personal. We strive for our customers to love us and our mRNA Vaccine products.

07. WHAT is the unique long-term GROWTH goal of Normax?

Our long-term growth goal is to develop up to 100 mRNA Vaccines and deploy up to 100 Vax Factories around the world.

08. WHAT is the unique long-term IMPACT goal of Normax?

GOAL 2050 is THE NEW GLOBAL CAMPAIGN To End The Transmission of Tuberculosis and HIV by 2050.

The tools to achieve this goal:

09. WHAT is the core business of Normax?

10. HOW does Normax plan to be profitable in the mRNA Vaccine Business?

Normax estimates that the average cost for Normax Vax Factory to manufacture mRNA Vaccines at large scale for infectious diseases is about $2.00 per dose, or less.

Normax plans to sell our mRNA Vaccines for infectious diseases on large scale advance purchase agreements (APA) with customers at about $4.00 per dose.

This represents a gross profit on sales of 100%.

While big pharma charges anywhere from $8 to $35 per COVID vaccine dose, Normax believes that a 100% gross profit mark-up on sales represents a sustainable and profitable high-impact business for our investors.

The first mRNA Vaccines currently in early stage research and development by Normax are for:

In theory, mRNA vaccines by Normax could save-a-life for less than the cost of a hamburger.

11. HOW do mRNA Vaccines work?

mRNA vaccine technology is a transformative new sector of the biopharmaceutical industry which has revolutionised vaccine development through increased speed, safety and cost-effective development leading to the first approved vaccines for the COVID-19 pandemic.

How mRNA Vaccines will be Manufactured in Vax Factory by Normax

How mRNA Vaccines are Used

How mRNA Vaccines are monitored for Safety and Effectiveness

12. WHAT mRNA Vaccines are in development by Normax?

With an early stage budget of €25,000,000 each, Normax is currently developing mRNA vaccines for:

13. WHERE will the first five Vax Factories by Normax be located?

With an early stage budget of €25,000,000 each, Normax is currently developing mRNA Vax Factories planned to be located in:

It takes 18-24 months from launch to deliver and deploy a regulatory compliabnt and productive Vax Factory by Normax.

14. HOW does Vaxcomm support the Normax IP management strategy with Freedom to Operate (FTO)?

Vaxcomm is The Vaccine Freedom to Operate (FTO) Commons

Vaxcomm is a Global Public Health Commons with Open Participation and Membership Opportunities for Scientists, R&D Organizations and Industry.

The mission of Vaxcomm is:

Normax is in the business of mRNA vaccine Research, Development and Manufacturing.

NOT AN OFFER TO INVEST.

16. WHY is mRNA Vaccine technology understood as “the digitization of vaccines”?

Abstract. The SARS-CoV-2 pandemic has generated a renaissance in vaccinology, with COVID-19 mRNA vaccines delivering a “digital code” of the viral antigen with no need to purify proteins or inactivate pathogens.

Fig. 1. Impact of digital vaccines on vaccinology.
Analog vaccines (left) require isolation of the pathogen or the generation of a recombinant cell line to produce the protein antigen through fermentation and purification. This is a complex and long process where scale-up of new manufacturing methods can take years. In contrast, digital vaccines (right) only require genetic information encoding the antigen and not the protein antigen itself. Such genetic information can be shared via the internet and used by multiple laboratories and production facilities around the world. In the case of mRNA-encoded vaccines, the same manufacturing process and facility can be used for multiple vaccines. Digital vaccines enable much faster vaccine development (bottom). Traditional analog vaccines can take 10 to 15 years from discovery to clinical use. Parallel clinical development of COVID-19 mRNA vaccines, with overlap of phase 1, 2, and 3 clinical trials, resulted in emergency use authorization by the FDA within 10 months, without compromising safety and efficacy. 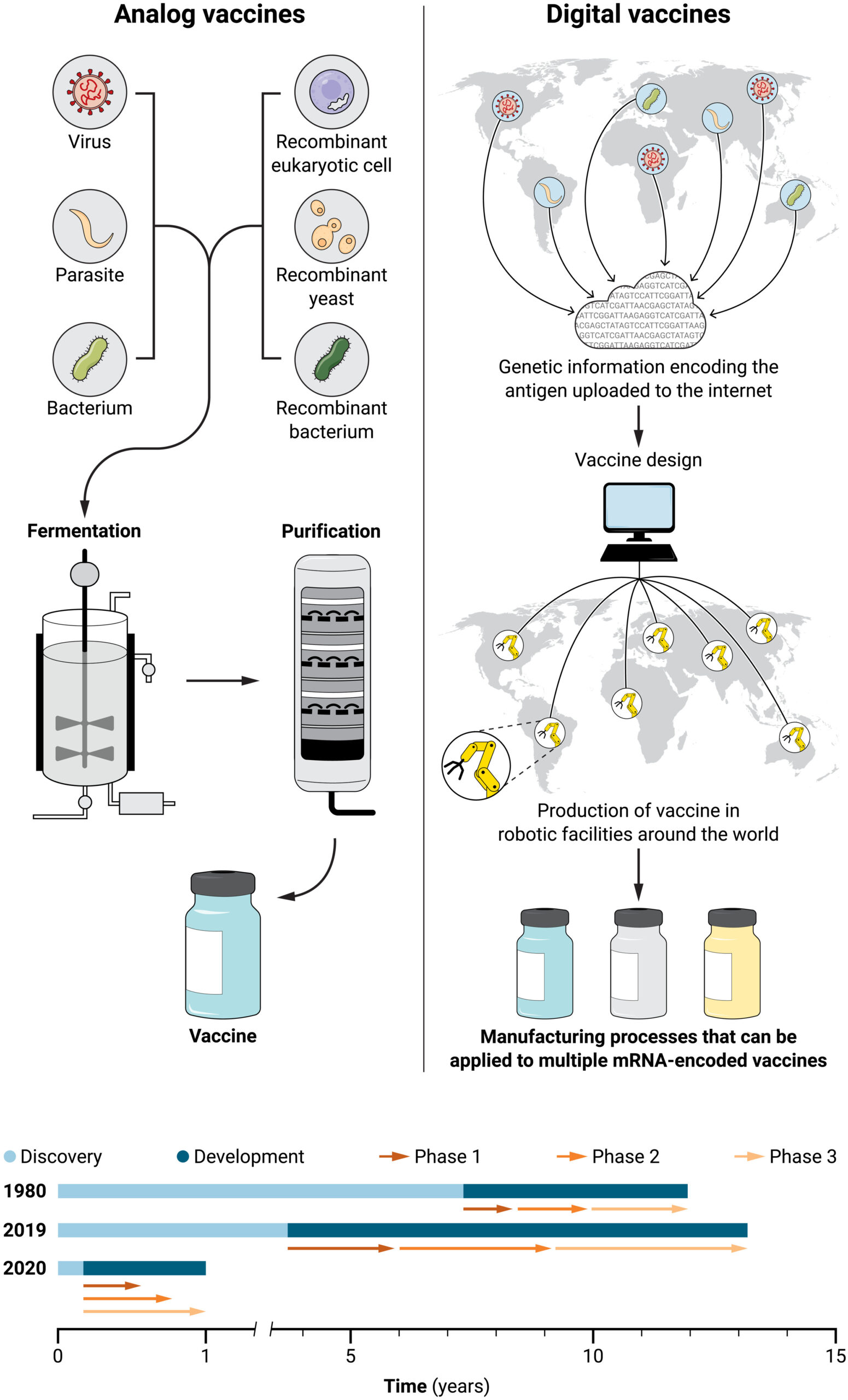 17. WHAT are the general terms of the €300 million legally binding Share Subscription Facility (SSF) with Global Emerging Markets (GEM)?

Under the agreement, GEM will provide Normax with a Share Subscription Facility (“SSF”) of up to €50 Million for a 36 month term following the public listing of the Normax common stock, and an SSF of up to €250 Million for up to ten specialized Normax Subsidiary Companies (“SPV”) of Normax Group. Normax will control the timing and maximum amount of each drawdown under the facility and has no minimum subscription obligation. Normax plans to list on SIX Swiss Exchange and/or SIX Digital Exchange (SDX) and/or London Stock Exchange with digital Normax mRNA Vaccine and Vax Factory SPV listings on SDX.

The SSF entered into with GEM Global Yield LLC SCS, Luxembourg, and GEM Yield Bahamas Ltd (collectively “GEM”) is a EUR 300 million facility over three (3) years and allows Normax to draw down funds at its option in exchange for Normax common shares. The mechanics of the GEM facility allow for multiple draw-downs, the amount being in a range related to the trading volume and price of the Normax shares. Normax will control the timing and maximum amount of any draw-down, and has the right, not the obligation, to draw down on the full committed amount. The draw-down amount is based on 90% of the average closing price and the average volume of the Normax common shares of the last 15 trading days. The consideration for the GEM facility is due for payment by Normax in twelve months from the listing of the shares on SIX Swiss Exchange and can be paid by way of Normax shares. In addition, GEM has been granted warrants to purchase Normax shares.

18. WHAT is the listing plan for Normax?

Normax plans to list in the near future on the new SIX Sparks exchange for high-growth SMEs by SIX Swiss Exchange.

Normax SPVs (10) are planned to be listed in 2023 on SIX Sparks or the SIX Digital Exchange (SDX).

19. WHO are the strategic service providers and vendors for Normax?

20. WHO are the major players in the rapidly growing global mRNA vaccine & therapeutics industry?

21. HOW does Normax plan to compete in the global mRNA-based pharma business?

23. WHO is the media agent for Normax?